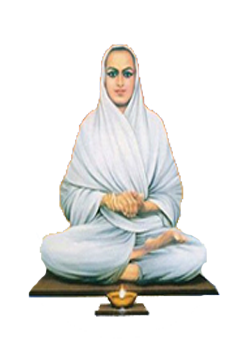 Ramalinga was born in Marudur (next to Chidambaram, in South India), on sunday October, 5 1823. Being only five months, his parents carried him with themselves in pilgrimage to the temple of Nataraja in Chidambaram. His father died a month later. Moved their residence to Madras, the older brother Sabapathi assumed the responsibilities of family head. When Ramalinga was five years old, with a prodigious facility he learned to read under the supervision of the Sabapathi's teacher. Instead of attending to the school, he passed the time reciting in ecstasy poems written by himself in the temple of Kanthakottam (Madras). Sabapathi reproached him this attitude, but seeing that it didn't give any result he ordered his wife Pappammal never more admit him in their house to feed. Breaking this order, she fed him secretly when he was hungry because she considered him as if he was her own brother.

Arrived the anniversary of their father's death, Sabapathi prepared a banquet inviting to all friends and relatives. Ramalinga, that had not dared to attend there, found his sister-in-law waiting for him in the rear door of the house when he arrived secretly late in the night. She invited him kindly to take the leftovers of the feast, but seeing how he swallowed the cold and past food, moved by a deep maternal feeling, she started to cry. He asked her the reason of her crying and she, with smoothness, begged him turn to study as it was the wish of his brother, since he shouldn't be seen in the need of eat cold meal neither to do it stealthy. Ramalinga boy was moved by her loving words as well as by the affection and compassion demonstrated. Then he asked for have a room that was free in the top of the stairs, and also a mirror and a lamp because he was determined to study. What he requested was granted him instantly and he was enclosed in that room. It is said that once being there he lavished praises on the Divine. The Eternal Light (Arut Jothi) was filtered through the mirror spilling abundant Grace on him, who obtained the Omniscience power from God himself. Ramalinga received his instruction by the Grace, not admitting reply the fact that all was learned in intuitive way. This event, happened in the house of Madras at the age of nine, was decisive in his life. Each one of the tears spilled by Pappammal, moved by a maternal and loving instinct affection, were returned years later with the creation of Samarasa Suddha Sanmarga Movement.

Suddha Sanmargam is the society of those who practice the pure humanhood and goodness path which bring to absolute Felicity, Compassion and Knowledge manifested in this world.

These days, Suddha Sanmargam teaching is the one which is the most adapted to our living style and time.

It does not require an intense sadhana isolated from the world, but an active life in the world of matter which is full of Universal Love, Light, Truth, Joy, Knowledge and Compassion for all life.

Vallalar is giving the following explenation about the truth humanhood society of the pure path of goodness and harmony, Samarasa Suddha Sanmargam Sathya sangam :Understand that it is the society of the persons who follows the four art or margam. The four margam who are the essence of the teaching of the book of universal wisdom Thiruarutpa, designated to the adept of all religions.

The Suddha Sanmargam association as for goal to shine felicity across divers projects who can help and take away the humanity suffering in the world, this in harmony with Vallalar's message.Those projects are the transmission of knowledge and experience, the support of orphanage and houses for elders in India. As well as the project of the Humanhood village and the school of the future new world.

He made an indelible mark in the religious history of India when he came out openly against its caste system and the negative impact it had on society. In an attempt to redress the situation he established the `Samarasa Suddha Sanmarga Satya Sangam'[3] in 1865, which means `Society for pure truth in universal self-hood'. He had also by this time shifted to a place called Karunguzhi from Chennai. His next step in establishing a practical approach to religion was the setting up of a free eating house called The Sathya Dharma Salai[8] in a place called Vadalur in 1867, where all could eat without any distinctions whatsoever. Ramalinga Vallalar abhorred non-Vegetarianism. In one of his poems he says:

When I see men feeding on the coarse and vicious food of meat, it is ever-recurring grief to me.

It is significant that the land on which this eating house was built was donated by a few landowners. The registered document is available for inspection even today and the service of providing free food also continues to this day.

Ramalinga Adigal opened a temple at Vadalur on January 25, 1872, called the "Sathya Gnana Sabha" (Hall of True Knowledge), - One of the primary teaching of valallar is "Service to mankind is path of moksha". He declared that death is not natural that our life's first priority should be fight death. He declared religion in itself is a darkness. He laid a very great emphasis on being vegetarian. He said God is "Arut Perum Jothi" who is personification of mercy and knowledge. He said the path of compassion and mercy are only path to God.

He advocated a casteless society. Vallalar was opposed to superstitions and rituals. He forbade killing animals for the sake of food. He advocated feeding the poor as the highest form of worship. He condemned inequality based on birth.

Today there are spiritual groups spread out all over the world who practice the teachings of Swami Ramalingam and follow the path of Arut Perum Jothi. The most notable living Siddhars of this age are Sri Pranasiddhar and Sri Vadapalani Paranjothi Baba.

Maruthur is a small village near Chidambaram, Cuddalore District in Tamil Nadu of South India. There lived a couple Ramayya Pillai and Chinnamai. They belong to saivaite family and they were great devotees of Lord Nataraja (Lord Siva) of Chidambaram. Ramayya Pillai was a village Accountant.